Payday loans were first legalized in the 1990′s. The idea is simple: Allow almost anyone to take out a small loan and charge them a flat fee with a short deadline. The average loan is $350 and average loan fee is over $50. 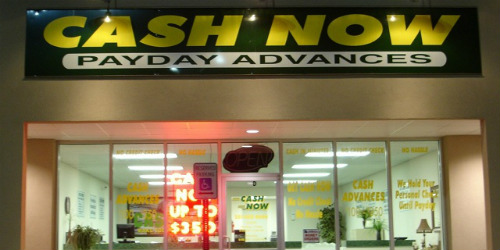 Borrowers write a personal check that is post dated and the payday location holds it until the original loan is paid off. The borrower must pay back the loan or they are forced to deal with a bounced check and other financial consequences.

The majority of borrowers entrap themselves by never paying off the original loan and instead paying the loan fee to take out another loan to pay off the first. While this premise sounds bad enough, there are many other aspects of the payday industry that are just as shocking.

The payday industry operates in 35 states across nearly 23,000 locations. In the course of a year the industry generates $27.2 billion of loans. However $20.6 billion of the loan volume, 76%, derives from “churned” loans. A “churned” loan is defined as a loan made within the same two-week period in which a previous loan is paid off. Two weeks is the normal deadline for payday loans.

The vast majority of business stems from the borrowers inability to repay the original loan, causing them to immediately take another out and pay an additional fee. These are not one time loans, people become entangled in multiple loans and the fees begin to pile up.

2. The enormous amount of churned loans amounts to $3.5 billion in profit from fees

This is where the payday industry makes their money. Where your credit card only charges you interest if you fail to pay off the entire amount of a purchase, you pay upfront a flat fee to simply take out a loan. Since 76% of loans are repeat loans, the industry makes profit by getting the borrower to keep paying for loans because of their inability to pay off the initial loan. The average fee is $17.50 per $100 borrowed and for many this seems miniscule, but it adds up over the course of a year if not remedied.

3. There are two payday locations for every Starbucks

4. In the 29 of 35 states where payday lending is legal there are more payday locations than McDonalds

Out of the 35 states that allow payday stores, there are 12,400 McDonalds compared to over 23,000 payday loan locations. Again, pretty shocking statistic considering we believe McDonalds to be one of the most ubiquitous businesses in our country.

5. The lowest APR cap is 156% in Texas and seven other states have no interest caps. The standard credit card APR is 16-18%

APR is annual percentage of rate. This is the interest rate for a whole year as applied to a loan. Basically, the APR calculates how much interest you pay if you borrowed the loan for a full year. For example, a payday loan fee of $17.50 per $100 for a two week loan equates to 455% (17.5% x 26 weeks).

Payday APR is astronomical compared to credit cards and other methods of borrowing. Payday locations trick potential borrowers by not revealing this statistic, instead focusing on the loan fee. Almost all borrowers do not realize the interest is in fact horrendous compared to other alternatives such as a regular cash advance or even loan from a friend for free.

7. It’s frighteningly easy to obtain one of these loans

All a customer needs is a bank account, proof of income and identification. No location performs a full credit check or analysis to see if the loan is healthy in regards to the customer’s financial status. It’s harder to apply to many credit cards than it is to yank out a 455% APR loan.

8. Everything is due at once. You cannot make payments

This may not seem bad at first thought. Compare it to alternative loan methods and you see the disparity. Payday loans are short term loans that require you to pay back the entire amount or be forced to take out another loan.

Alternatively, many credit cards offer a grace period of repayment upwards of 30 days before any interest is charged. Even then, you can make small payments on purchases and combined with the relatively low APR on credit cards, this isn’t a big problem for most people. With payday loans, you are bound to pay the entire sum up front, so most people are forced to take another loan out immediately, thus paying the drastically high APR yet again. Either way, you are paying way more for a loan than you should be.

9. The industry constantly tries to undermine the law

Lots of lenders use sham transactions where they attempt to cloak the loans. An example is creating internet payday sites with rebate schemes that can avoid small loan laws in certain states. Texas lenders often operate as unregulated credit services organizations to blur their definition under state law. Locations in Illinois and New Mexico offer high cost installment loans instead of single payment loans to evade state law restrictions.

Statistics reveal in California payday lenders are eight times more concentrated in neighborhoods with the largest percentage of African Americans and Latinos. While the payday industry has been officially banned in North Carolina, many lenders still operate because of their affiliation with out of state banks. Of these that remain, they are three times more concentrated in the minority neighborhoods than Caucasian.

In these tough economic times, banks are getting much more strict about lending money. A missed mortgage payment or defaulting on credit card debts is enough to tarnish your credit report and making it difficult for you to get loans from the banks.

Fortunately the good thing is you may still be eligible for credit but under different conditions. While it may be harder to get normal loans with bad credit, it is possible to get bad credit personal loans. One of the biggest disadvantage of a bad credit personal loan history is that your interest rates will be higher that normal rates. Your loan may also be subjected to extra fees such as processing fees.

Another advantage of bad credit personal loans is that you are almost assured to get them hence they can be a good bail out plan for people in need of cash. This is because past credit records may not influence your chances of getting a loan. They can also be used to pay up other expenses such as utility bills, emergency expenses or other personal needs.

There are a few requirements for bad credit personal loans such as not having a steady income, a resident of the U.S. and at least 18 years old. There is also a limit as to how much one can borrow. The highest amount you can get is $1,500 which means if your need more than that you may have to find alternative means to foot your expenses.

If you have a bad credit history and cant access other loan options, bad credit personal loans is always a fast and convenient option. Just make sure you don’t use it as a long term financial solution.…

Bad credit personal loans are available for people who have a poor credit standing and are in need of money. People use this borrowed amount for various purposes such as sudden family expenses, the purchase of a new car or home, unexpected medical bills, weddings, and even for restoring their credit records.

Over the past few years, bad credit personal loans have become very common. People from all walks of life seem to have been affected by the instability of the economy. This has resulted in mountain-high debt and subsequent poor credit standing experienced by consumers. Recent trends show that bad credit personal loans are becoming increasingly more popular than regular loans. The majority of consumers do not qualify for regular loans so they turn to this alternative personal loan.

Bad credit personal loans are unsecured loans which are especially intended for people with poor credit ratings. In fact, anyone can apply for this loan. Unlike other types of loans or financing schemes, it does not entail a lengthy application process or extensive credit checks. Also, since these loans are unsecured, there’s no need to present your properties as collateral.

You can use the loaned amount for any purpose. Although there’s no limit on your choice of spending, do remember that bad credit personal loans are meant for short term expenses and must be cleared as soon as possible. They provide an immediate solution to your urgent financial needs.

To find a bad credit personal loan, you can browse online for lending companies offering such loans. There are virtually millions of creditors willing to approve loans to people with a poor credit standing. However, it’s not easy looking for a loan term that matches both your needs and your financial capacity. Browsing through different banks and searching for the best terms is a challenging task.

This is where online credit matching services such as Credit Season come in. Credit Season are professionals in this field and work with a nationwide network of lenders, so you are assured of getting matched instantly. Once you complete the online application form, your details will be matched with dozens of lenders and credit companies. As soon as a match is found, you will be redirected to the lender’s website where you can review loan amount, terms of loan and rates. After verifying and signing the loan agreement, the money requested will be sent directly to your bank account. It is a hassle-free and easy way of borrowing money.…